How to control your emotions in trading

Legendary Warren Buffet once said, “If you cannot control your emotions, you cannot control your money.” Controlling emotional responses is what will differentiate successful traders from losing ones. In this article, we will analyze the psychological components that drive the market and how to control them to boost your trading account.

The rationality of financial markets has been one of the most discussed issues in financial economics. Recent critics of the Efficient Markets Hypothesis argue that investors are generally irrational. They often exhibit several predictable and financially detrimental biases, usually attributed to psychological factors such as fear, greed, and other emotional responses to price fluctuations.

A couple of years ago, MIT researchers conducted a trading psychology experiment on 80 trading students enrolled in Linda Bradford Raschke’s trading curriculum. The study analyzed in parallel the trading performance and the emotional state of day traders. A clear correlation between emotions and trading performance was discovered. Specifically, the results showed that subjects whose emotional reactions to monetary gains and losses were more intense exhibited significantly worse trading performance.

Having the best trading plan and following a robust trading strategy made of clear rules is not enough to boost your trading account and stop losing money. What is critical is to stick to this plan and to control your emotions. Trading involves higher brain functions such as logical reasoning, numerical computation, and risk-reward planning. Neurosciences tell us that emotional responses mediated by the limbic system will short-circuit more complex decision-making and will lead to poor decisions and ultimately bad trading.

Trading and the four horsemen 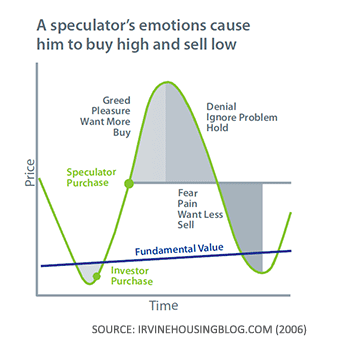 In trading, the “four horsemen” have a name: Fear, Greed, Hope, and Regret. No trader is immune to the trading consequences of these emotions. Even the best investors can get carried away, or else be made miserable by a deep market downturn.

Fear and Hope will impair your trading results both before and after placing the trade. The only way to consistently control your fears and hopes is to bypass your brain and mechanically stick to a carefully back tested trading plan.

The market as an emotional rollercoaster

The market is an emotional rollercoaster. In the last couple of years, Sentiment analysis indicators have gained massive popularity. The CBOE Volatility Index (VIX) is now routinely used to time market entries and exits. Behavioral Finance that studies the influence of psychology on the behavior of investors is now widely considered and focuses on the fact that traders are not always acting rationally.

The five most common behavioral dangers are:

Human emotion drives financial markets as much or more than market fundamentals. When things are going as expected, we feel that it will continue and that nothing can stop us. Moreover, when things go wrong, we look to take drastic action. Emotions should always be controlled to maintain awareness. This awareness will protect traders from the negative consequences of impulsive and irrational actions.

Get rid of your emotions with Automated trading systems

It is critical to be able to control your feelings, to develop a trading plan, and to stick to it to become a successful trader. Automated trading systems such as TRADOTO dramatically help traders establishing specific rules for both trade entries and exits. No more guessing. Once programmed, the system will automatically and without any emotion execute the trades. When adequately back tested and optimized, automatic trading systems are the best way to drive your way to trading successes and financial independence. Automated trading systems are the ultimate way not to be influenced by emotions and to let your careful back tested strategies handle the trades logically and efficiently.

Kahneman, D. and Tversky, A. (1979) “Prospect Theory: An Analysis of Decision under Risk”

Our fully automated trading strategy handles all the heavy lifting so you can stop managing trades and start looking for new opportunities.

We firmly believe in and stand with our strategy. If you find a bug with our strategy that we are unable to resolve, we are more than happy to provide a complete refund within 60 days of your original purchase.

A couple of points: